5 Opulent Palaces of Jaipur that You Must Visit Once

Popularly called the Pink City, Jaipur, the capital city of Rajasthan, is one of the popular places to visit in India. Rich in culture and heritage, Jaipur boasts of a rich lineage of kings and is synonymous with royalty and splendor. The magnificent forts and palaces in Jaipur are a livid example of stunning architecture and the grandiosity of the various Rajput dynasties. Some of these forts and palaces have completely been transformed into heritage hotels while some are still occupied by the newer generations of the original royals. So what are u waiting for? Pack your packs and visit these opulent royal palaces of Jaipur as part of your Rajasthan tour packages.

Check the list of exotic palaces in Jaipur
here. 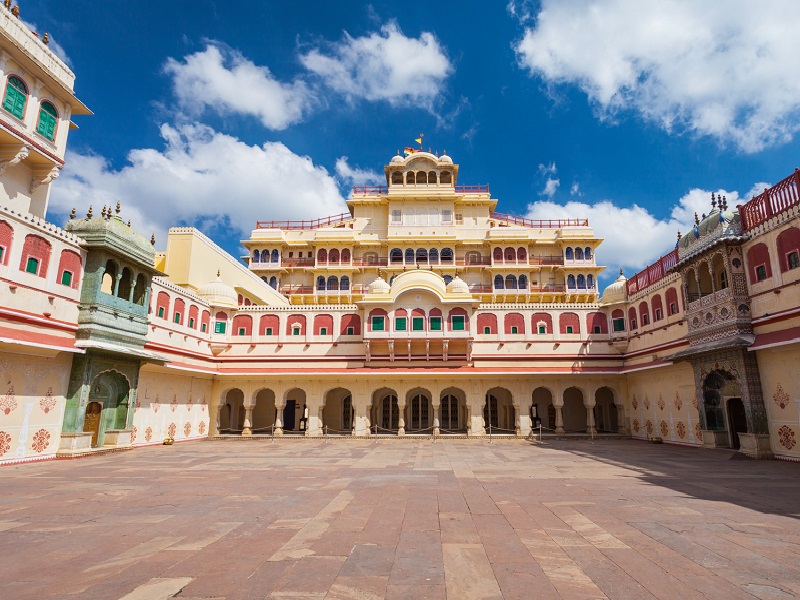 Built-in 1732 by Maharaja Sawai Jai Singh II, City Palace is one of the most treasured palaces in India, and among the st-visit tourist places in Jaipur. Boasting European, Rajput and Mughal architectural styles, this palace spreads over a large area which occupies one-seventh of the walled city and features an array of gardens, temples, and pavilions. Chandra Mahal, Maharani’s Palace, Mubarak Mahal, Shri Govind Dev temple, Diwan-i-Aam, and Diwan-E-Khas are the prominent structures inside the City Palace complex. At present, most of this palace is the residence of the descendants of the former rulers of Jaipur. Only the ground floor is allowed for visitors where the Maharaja Sawai Man Singh II Museum is located that displays carpets, manuscripts and other items that belonged to the royal family. 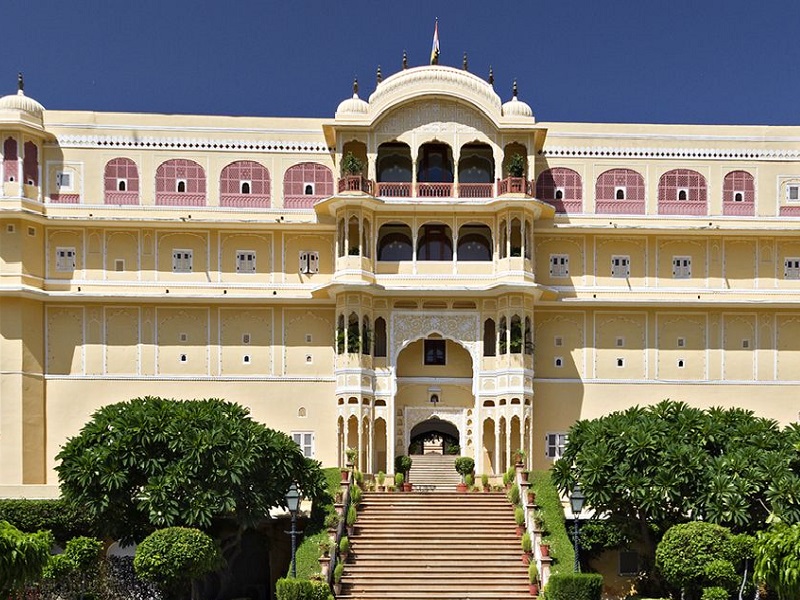 About 40 km from Jaipur, Samode Palace or Samode Haveli is a heritage monument built 175 years ago as a residence of the rulers of Samode. Initially, it was built as a Rajput Fort, but it was converted into an exquisitely designed palace in the early 19th century, under Rawal Barisal. Spread over an area of 20 acres, it is one of the lavish royal palaces in  Rajasthan, and among the prominent places to visit near Jaipur. Samode Palace is a brilliant example of European, Rajput & Mughal architectural designs. It was built using sandstone at the foot of Aravalli hills with a fortress-like setting. The Palace encompasses the Durbar Hall, Sultan Mahal, and Sheesh Mahal. The interiors of the palace are composed of marble floors, intricately ornamented pillars, mosaic walls decorated with old wall paintings. In 1987, it was converted into Samode Palace Heritage Hotel. 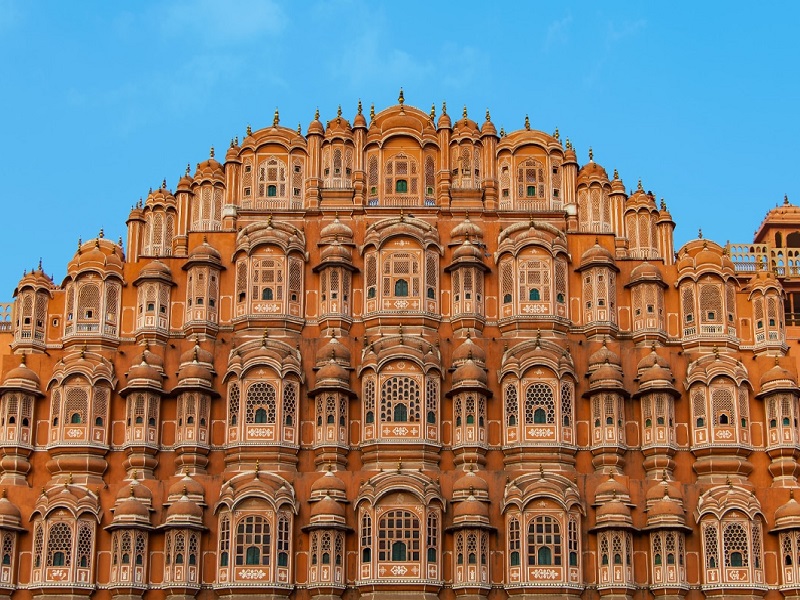 One of the most important landmarks in the city of Jaipur, the renowned Hawa Mahal or the Palace of Winds was constructed in 1799 by Maharaja Sawai Pratap Singh as a continuation to the stunning City Palace. The main architect of this palace is Lal Chand Ustad and the palace is believed to have been constructed in the form of the crown of Krishna, the Hindu God. The palace is constructed of beautiful red and pink sandstone and it looks like a five-storeyed Pyramid. Its unique five-storey exterior has 953 small windows called jharokhas decorated with intricate latticework. The original intention of the lattice was to allow royal ladies to observe everyday life in the street below without being seen. The interior of the palace is very elegant. The upper floors of the palace can be reached by climbing the narrow ramps. There are no stairs inside the Hawa Mahal, Jaipur, among the top heritage sites near Delhi. 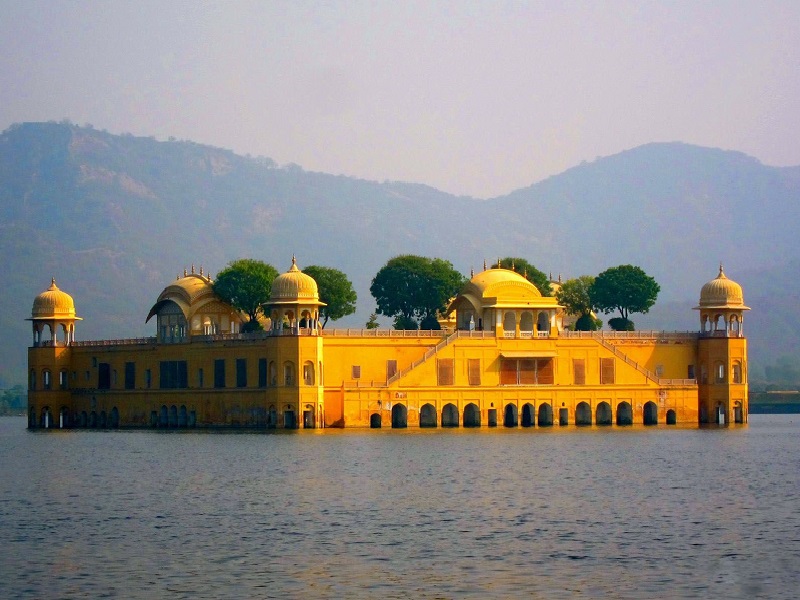 Standing tall in the middle of the Man Sagar Lake, Jal Mahal or Water Palace Jal Mahal was built in the 18th century by Sawai Madho Singh I as a summer resort. The palace was renovated and expanded in the 18th century by Madho Singh II. It is considered an architectural marvel built in the Rajput and Mughal styles of architecture. It provides a picturesque view of the lake from the Man Sagar Dam and the surrounding Nahargarh hills. Built using red sandstone, it is a five storyed building out of which four floors remain underwater when the lake is full and the top floor is exposed. The palace looks mesmerizing in the evenings when the entire structure is immersed in flood lights. One can see many migratory birds around the Jal Mahal during winters as part of Jaipur tour packages. 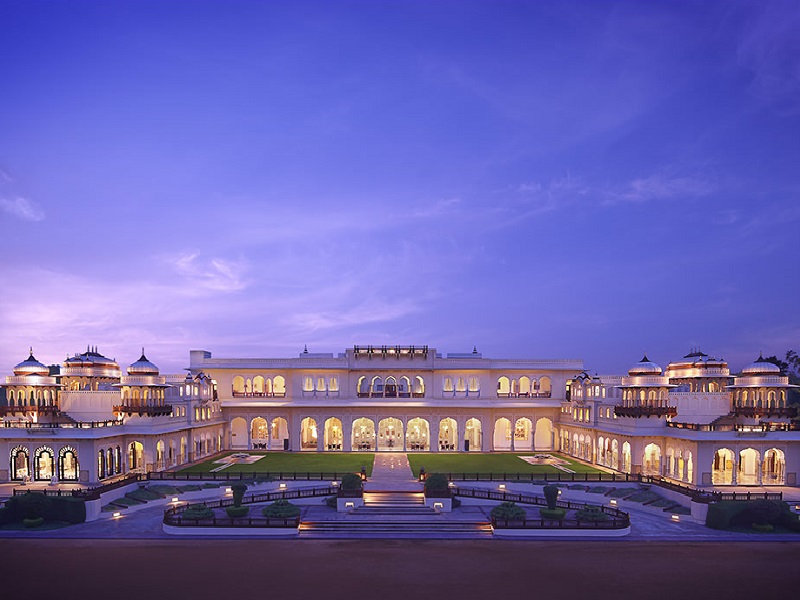 The Rambagh Palace is another opulent palace situated in Jaipur. The palace was originally built in 1835 for the nurse of Prince Ram Singh II. Later it has gone through many royal transitions from the home of the queen’s favorite maiden to royal guesthouse and hunting lodge, and later as the residence of the Maharaja Sawai Man Singh II. Spread over an area of 47 acres, Rambagh Palace presents a fine blend of Rajput and Mughal architecture. Now, it is a heritage hotel run by the Taj Hotels and resorts which has been playing gracious host to many dignitaries from India and abroad like Queen Elizabeth and Prince Philip. It is one of the best heritage places to visit in Rajasthan.