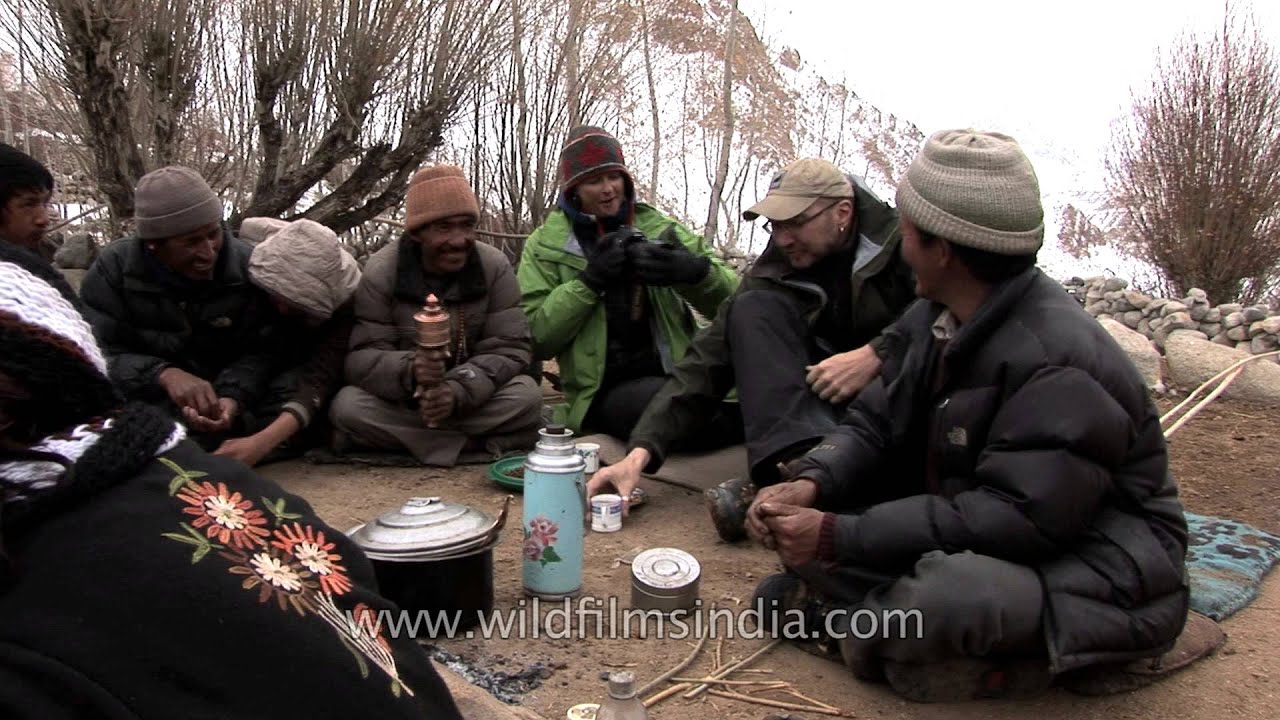 Foreign tourists join Ladakhi for tea-break at a village in Ladakh, Kashmir, India. This family serves them salt and butter tea along with some Ladakhi snacks.

Butter tea, also known as po cha, is a drink of the people in the Himalayan regions of Nepal, India and Bhutan and most famously, Tibet. It is also consumed in Bhutan and by Buddhist minorities in India. Traditionally, it is made from tea leaves, yak butter, water, and salt, however, given its wider availability and reduced cost, butter made from cow’s milk is increasingly used.

Ladakh is a region of India in the state of Jammu and Kashmir that extends from the Karakoram Range in the north to the main Great Himalayas to the south, inhabited by people of Indo-Aryan and Tibetan descent(” According to Hinduism Yaksha people born from 5th wife of Kashyapa Rishi). It is one of the most sparsely populated regions in Jammu and Kashmir and its culture and history are closely related to that of Tibet.

Historically, the region included the Baltistan (Baltiyul) valleys (now mostly in Pakistani Kashmir), the entire upper Indus Valley, the remote Zanskar, Lahaul and Spiti to the south, much of Ngari including the Rudok region and Guge in the east, Aksai Chin in the northeast, and the Nubra Valley to the north over Khardong La in the Ladakh Range. Contemporary Ladakh borders Tibet to the east, the Lahaul and Spiti to the south, the Vale of Kashmir, Jammu and Baltiyul regions to the west, and the trans–Kunlun region of Xinjiang on the north side of the Kunlun Range across the Karakoram Pass in the far north. Ladakh is renowned for its remote mountain beauty and culture.

In the past Ladakh gained importance from its strategic location at the crossroads of important trade routes, but since the Chinese authorities closed the borders with Tibet and Central Asia in the 1960s, international trade has dwindled except for tourism. Since 1974, the Government of India has successfully encouraged tourism in Ladakh. Since Ladakh is a part of strategically important Jammu and Kashmir, the Indian military maintains a strong presence in the region.

The largest town in Ladakh is Leh. Almost half of Ladakhis are Tibetan Buddhists and the rest are mostly Shia Muslims. Leh is followed by Kargil as the largest town in Ladakh. Some Ladakhi activists have in recent times called for Ladakh to be constituted as a union territory because of perceived unfair treatment by Kashmir and Ladakh’s cultural differences with predominantly Muslim Kashmir.

This footage is part of the professionally-shot broadcast stock footage archive of Wilderness Films India Ltd., the largest collection of HD imagery from South Asia. The Wilderness Films India collection comprises of 100, 000+ hours of high quality broadcast imagery, mostly shot on HDCAM / SR 1080i High Definition, Alexa, SR, XDCAM and 4K. Write to us for licensing this footage on a broadcast format, for use in your production! We are happy to be commissioned to film for you or else provide you with broadcast crewing and production solutions across South Asia. We pride ourselves in bringing the best of India and South Asia to the world…

Please subscribe to our channel wildfilmsindia on Youtube for a steady stream of videos from across India. Also, visit and enjoy your journey across India at www.clipahoy.com , India’s first video-based social networking experience!

Reach us at rupindang [at] gmail [dot] com and admin@wildfilmsindia.com