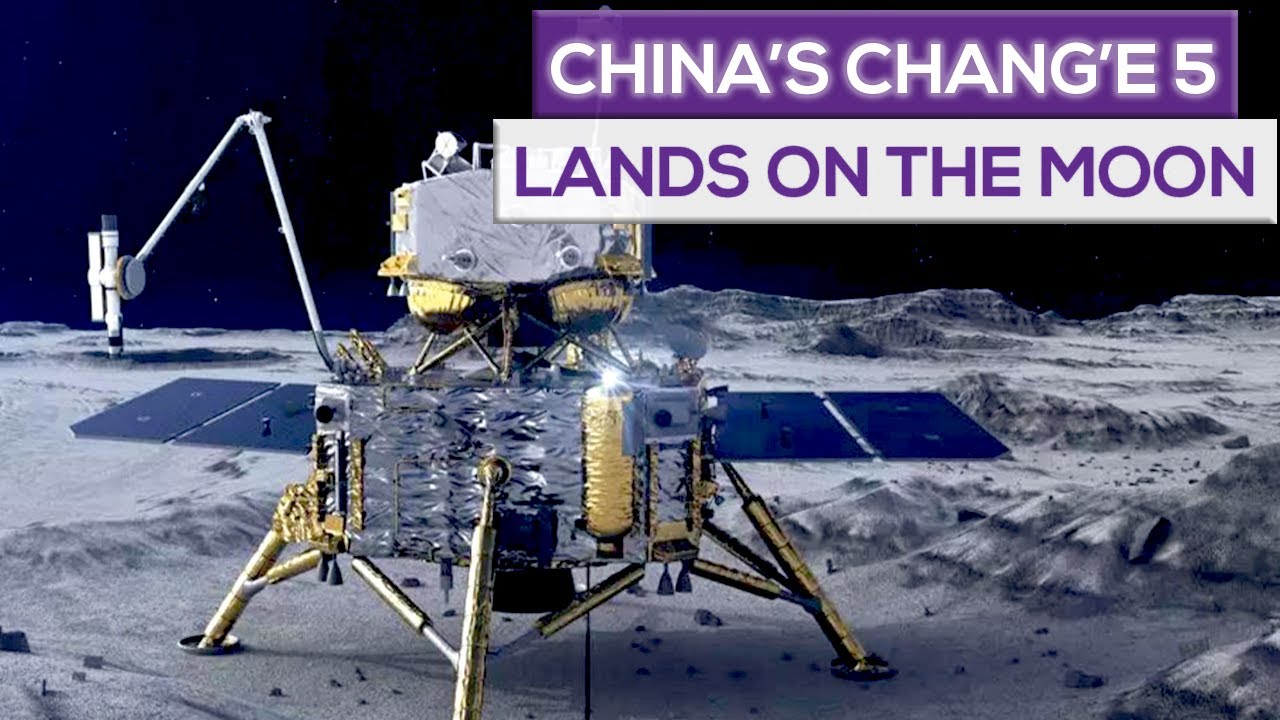 China’s Chang’e 5 successfully lands on Moon!
China has successfully put another probe on the Moon.
Its robotic Chang’e-5 mission touched down on December 1st 2020, with the aim of collecting samples of rock and dust to bring back to Earth.
The venture has targeted Mons Rümker, a high volcanic complex in a nearside region known as Oceanus Procellarum.
The lander is expected to spend the next couple of days examining its surroundings and gathering up surface materials.
It has a number of instruments to facilitate this, including a camera, spectrometer, radar, a scoop and a drill.
The intention is to package about 2kg of “soil”, or regolith, to send up to an orbiting vehicle that can then transport the samples to Earth.
——————————————————————————————-
Subscribe for more videos:
Business Enquiries: Lorenzovareseaziendale@gmail.com
——————————————————————————————-
“Follow me on this journey to learn more about this amazing mission program and to understand how we accomplished this aim: we made it thanks the hard work made by Chinese Engineers during the last twenty years.”

Chang’e 5  was launched on 23 November 2020 at 20:30 UTC and landed on the Moon on 1 December 2020, with an expected return to Earth around 16 December 2020. Chang’e 5 will be China’s first sample return mission, aiming to return at least 2 kilograms (4.4 pounds) of lunar soil and rock samples to the Earth. Like its predecessors, the spacecraft is named after the Chinese Moon goddess, Chang’e.
This is one of the missions that we were waiting for a long time.
We really couldn’t wait for this mission to be launched.
This will be the first lunar sample-return mission since Luna 24 in 1976 and – if successful – would make China the third country to return samples from the Moon after the United States and the Soviet Union. It launched from the Wenchang Satellite launch centre in Hainan Island.
Missions like this are awesome missions: you can choose the place you want for landing, dig a nice hole in the lunar soil and steal some rocks and stuff from its surface.
Then, you can finally launch a rocket that reaches an orbit around the moon, make it hook to another spacecraft and then launch it on its way back to Earth.
And, if everything worked out well, you can return in the Earth’s atmosphere, where the heat shield does its work and returns home carrying the sample that, until a few days ago, were belonging to the moon.

But let’s go deeper into this mission: what’s the Chinese plan?

This is the sixth Chang’e mission, but it is called Chang’e 5. Oh well, I know this could be a little bit confusing, so let’s see some of Chang’e missions history.
China is carrying out this mission program since 2007.
That was the first time for China to try to reach such a big accomplishment.
Chang’e 1 was thought and launched to orbit around the moon, helping engineers to improve their skills, making experience before launching the second mission, Chang’e 2.
Chang’e 2 was launched in 2010, and after its success it was taken over the lunar orbit, to make a fly in the deep space, in order to see if they could reach Mars with another probe, and some years later, that’s what they actually did: The mission — named Tianwen-1, which means ‘questions to heaven’ — is the country’s first attempt to land on the red planet.

And then it was the time for Chang’e 3 to map the moon.
It let us to find the first landing sites for the moon landing.
Chang’e 3 brought even a rover on the moon, in 2013. This was something which has not happened for several years!
When they finally found a good crater to land on, Chang’e 4 was launched and it landed on the dark side of the moon, a place that has never been explored before.

So, as you can see, the entire program was made of three steps:
1) orbit the moon
2) moon landing and exploration
3) bringing home moon samples

Science & Technology
Why are the stars, planets and moons round, even as comets and asteroids are irregular in shape?#why

Science & Technology
What If the Big Bang Wasn't the Beginning of the Universe?

Science & Technology
What If These Three Animals Swallowed You?
© Blimpt 2020. All Rights Reserved