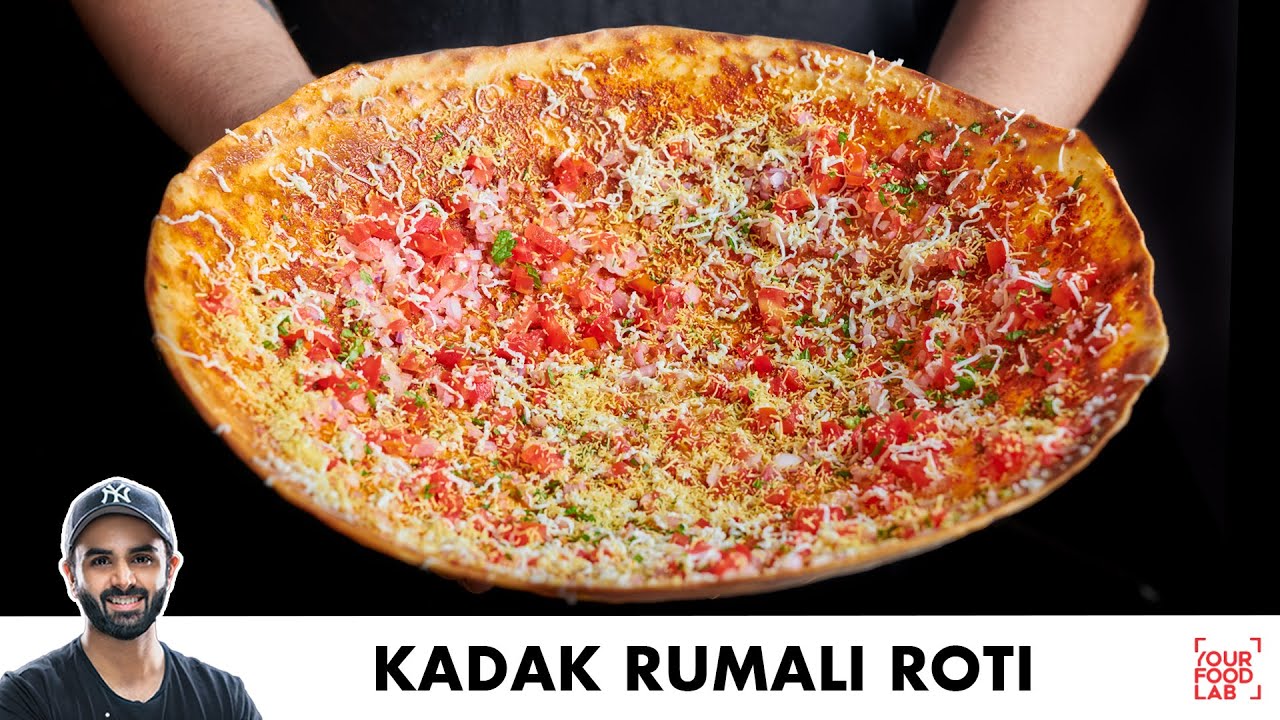 Ingredients:
Refined flour 1.5 cups
Wheat flour ½ cup
Sugar 1 tsp
Salt a pinch
Oi 1 tbsp
Luke warm Milk 1 cup
Assembly 1:
Kadak rumali
Melted butter
Chaat masala
Kashmiri red chilli powder
Lemon juice
Mint leaves
Coriander leaves
Assembly 2:
Kadak rumali
Melted butter
Periperi spice mix
Onions (Chopped)
Tomatoes (chopped)
Green chillies (Chopped)
Lemon juice
Cheese
Nylon sev
Mint leaves
Coriander leaves
Method:
In a mixing bowl, add all the ingredients, except milk and mix well, now add milk in batches and combine well, once it becomes like a dough, transfer over the table top and knead well for 10-12 minutes.
Initially you would feel the dough is very sticky, you can just sprinkle little flour and start the kneading process.
Now you have to knead the dough by holding it from one side and stretching the other end, the stretching of the dough while kneading is very important, doing so will help the formation of gluten and later while rolling the roti, it won’t shrink or tear.
You have to knead until the dough has turned soft and smooth.
Now divide the dough into equal size dough balls, you can divide the dough balls depending on the size of the roti you want. Cover the dough balls with a damp cloth and rest it for at least 1 hour.
To cook the kadak Rumali roti, take a kadhai and flip upside down, then place it on the flame facing the bottom of the kadhai up just like a dome. Heat the kadhai very well and further lower the heat. Make sure the kadhai has to be hot but not too hot, by the time you roll the Rumali rotis keep the flame of the kadhai low so to retain its heat.
After the dough has been rested, take a dough ball & sprinkle some dry flour and flatten with hands, further use a rolling pin and roll into a very thin sheet, as thin as a handkerchief, sprinkle dry flour as and when required while rolling. You should be able to see your hands, it should be that thin.
Now, place the rolled roti over the hot kadhai, and cook the roti on low flame, use a napkin and keep turning & pressing the roti while you’re cooking so it gets cooked evenly from all side, you have to cook the roti unless the excess moisture evaporates and that will make the Rumali roti crisp.
You have to cook the roti only from one side to make it shape like a big size bowl or a dome. You have to cook on low flame, cooking on high flame will darken the colour of the roti quickly and will not make it crisp.
It’ll take about 7-8 minutes to cook 1 roti, once the it becomes crisp, you’ll see the inner part of the roti has become golden brown in colour and crisp, remove carefully with napkin and let it rest for couple of minutes to make it more crisp in texture.
Once the roti has set and become crispy, you’re all set to serve the kadak rumali roti, but before that we need to add few toppings to elevate its flavour.
I’ll be making it two ways, one ill be adding some melted butter over it, sprinkle some chaat masala, kashmiri red chilli powder, lemon juice all over the kadak roti and some freshly chopped mint and coriander leaves.
Second way is, add some melted butter, peri peri spice mix, chopped onions, tomatoes, green chillies, lemon juice, grate some cheese and finish it by adding some nylon sev and freshly chopped mint and coriander leaves.