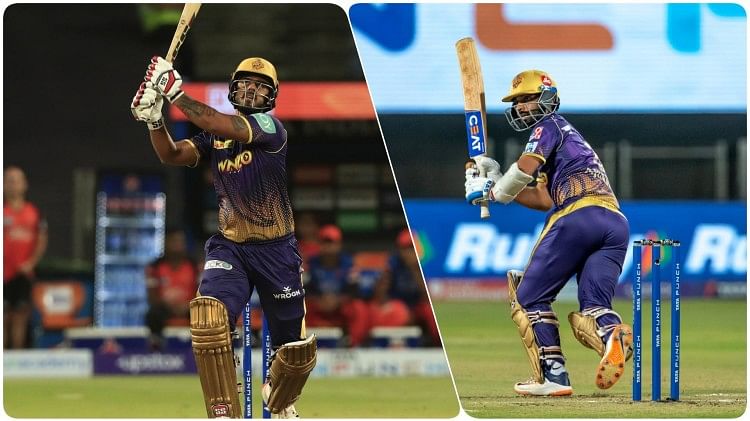 Kkr Vs Srh Live: Kolkata’s troubles increased, Umran gave double blows in his first over, Rana and Rahane both out

Umran Malik has made a great start in his first over by sending two sets of Kolkata batsmen to the pavilion. Umran got Ajinkya Rahane caught by Shashank on the last ball of the over. On the slammed ball of Umran, Rahane played a shot in the air towards sweeper cover but Shashank caught the best catch while running near the boundary. Rahane scored 28 runs in 24 balls before being dismissed. Kolkata Knight Riders after eight overs: 72/3, Shreyas Iyer (7*), Sam Billings (0*)

Nitish Rana failed to play a big innings after batting well. He was caught by Umran Malik on the third ball of his first over at the hands of Shashank Singh. Rana scored 26 runs in 16 balls before being dismissed.

Kolkata’s team made a great comeback after losing their first wicket in the second over and scored 55 runs in the first powerplay i.e. the first six overs. Hyderabad got a wicket during this period. In the last over of the powerplay, Nitish and Rahane hit two sixes in Yansen’s over and scored 17 runs. Kolkata Knight Riders scores after six overs: 55/1, Ajinkya Rahane (20*), Nitish Rana (24*)

T Natarajan, returning from injury, proved to be very expensive in his first over. Nitish Rana hit two sixes and a four in his over and scored 18 runs. Kolkata Knight Riders score after five overs: 38/1, Ajinkya Rahane (10*), Nitish Rana (17*)

Venkatesh Iyer has returned to the pavilion in the second over. He was bowled by Marco Yansen on the last ball of his first over. Venkatesh scored seven runs in six balls before being dismissed. Kolkata Knight Riders score after two overs: 17/1, Ajinkya Rahane (7*), Nitish Rana (0*)

Ajinkya Rahane hit his first six of the match. He pulled towards long leg in the third ball of the over from Marco Yansen and took six runs.

For Kolkata, the opening pair of Venkatesh Iyer and Ajinkya Rahane are on the crease while Hyderabad has given the new ball to Bhuvneshwar Kumar.

Playing XI of both the teams

A look at the Playing XI for #KKRvSRH

Sunrisers Hyderabad team has also made two changes in today’s match. At SRH, T Natarajan and Washington Sundar are back in a fit. Along with this, Marco Yanson has also been given another chance.

There have been two major changes in Kolkata’s team. Umesh Yadav has made a comeback in place of the injured Pat Cummins, while Sam Billings has been included in place of Sheldon Jackson.

Kolkata Knight Riders captain Shreyas Iyer has won the toss and elected to bat against Hyderabad.

The mood of this pitch at the MCA Stadium in Pune has changed since the last few matches. There is fresh green grass on this pitch. Fast bowlers will get help. There will not be so much rotation and the ball will come on the bat well. Today the batsmen can have a big advantage.

position in the points table

Kolkata team has registered five wins in 12 matches and is at the eighth position with 10 points. He will have to win the remaining two matches by a huge margin. Not only this, even after this he has to rely on the performance of other teams. But a single defeat will show him the way out of the tournament.

Hyderabad, on the other hand, have 10 points from 11 matches with five wins and are at the seventh position. Hyderabad have to play three matches and if they want to reach the playoffs then they have to win all. Otherwise, at least two matches will have to be won by a huge margin and then rely on the performance of the other teams.

Important match for Kolkata and Sunrisers

In the current season of IPL, nine more matches will be played after today’s match. The team of Gujarat has reached the playoffs, while the team of Mumbai and Chennai failed to reach the knockout matches. Now there is a competition between seven teams for three places. In such a situation, every match is going to be very important for all the teams. A single defeat can ruin the hopes of any team.