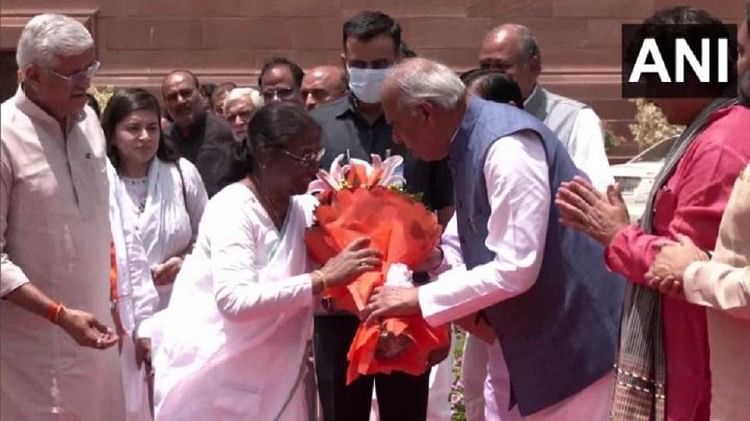 NDA candidate Draupadi Murmu is going to file nomination in a while. Earlier, Prime Minister Narendra Modi has reached the Parliament House.

#WATCH , Prime Minister Narendra Modi arrives at the Parliament ahead of the filing of nomination by NDA’s presidential election candidate Droupadi Murmu pic.twitter.com/3T3ZBBNV29

The matter has become interesting after tribal leader Draupadi Murmu was made the presidential candidate. At the same time, due to the opposition candidate Yashwant Sinha, who was MP from Jharkhand, a confused situation has arisen for the Jharkhand Mukti Morcha. In such a situation, Jharkhand Mukti Morcha has called a meeting of the party’s MPs and MLAs tomorrow. The meeting will be chaired by party supremo Shibu Soren. It will be decided in this meeting to whom JMM will give its support.

Security beefed up for opposition candidate Yashwant Sinha amid nomination of NDA candidate Draupadi Murmu. According to sources, he has been provided ‘Z category’ security.

No one took care of tribes in 75 years – Giriraj Singh

Union Minister Giriraj Singh said, Ramnath Kovind of the first scheduled society became the President. In 75 years no one took care of such a big tribe. The Prime Minister, giving a form to his words and deeds, has made one of the people living at the lower rungs of the society today’s presidential candidate.

Uttarakhand Chief Minister Pushkar Singh Dhami said, making Draupadi Murmu the presidential candidate shows that the BJP is committed to the upliftment of the marginalized. Various welfare and development works are being done for the tribals in the country under the leadership of PM Modi.

Many BJP leaders have reached Sansar Bhavan for the nomination of NDA candidate Draupadi Murmu.

UP Chief Minister Yogi Adityanath has reached the Parliament House. NDA’s presidential candidate Draupadi will be involved in the nomination of Murmu.