Situated on the banks of the River Yamuna, Agra is one of the most stunning places of heritage in India as it houses many ancient temples, mosques, forts, mausoleums, tombs, and historical monuments. Of these, the Taj Mahal, one of the Seven Wonders of the World, is the most prominent one. This white marble mausoleum was built between 1632 and 1653 by Mughal emperor Shah Jahan in memory of his beloved wife Mumtaz Begum. It is regarded as the best example of Mughal architecture worldwide and is called the “Jewel of Muslim Art in India”. Besides the Taj Mahal, there are quite a few worthwhile places to visit as part of Agra tour packages.

Check here is the list of 5 interesting places in Agra apart from the Taj Mahal by Trawell.in.

A UNESCO world heritage monument, Agra Fort, also known as the Lal Qila or Red Fort, is one of the prime places to visit in Agra after the Taj Mahal. It was originally a brick fort known as Badalgarh, held by Raja Badal Singh, a Hindu Rajput king (1475 AD), and was reconstructed by the third Mughal emperor Akbar on the remains of Badalgarh in 1555 CE. Spread over a gigantic area of 3,80,000 sq. m, this semi-circular fort is surrounded by a 70 feet high fortification wall. History unfolds in front of your eyes as you walk through the many structures inside the fort, like Shish Mahal, Khaas Mahal, Diwan-i-Khas, Diwan-i-Aam, Moti Masjid, and Nagina Masjid. Another attraction is the sound and light show in the evening that recreates the history of Agra Fort. 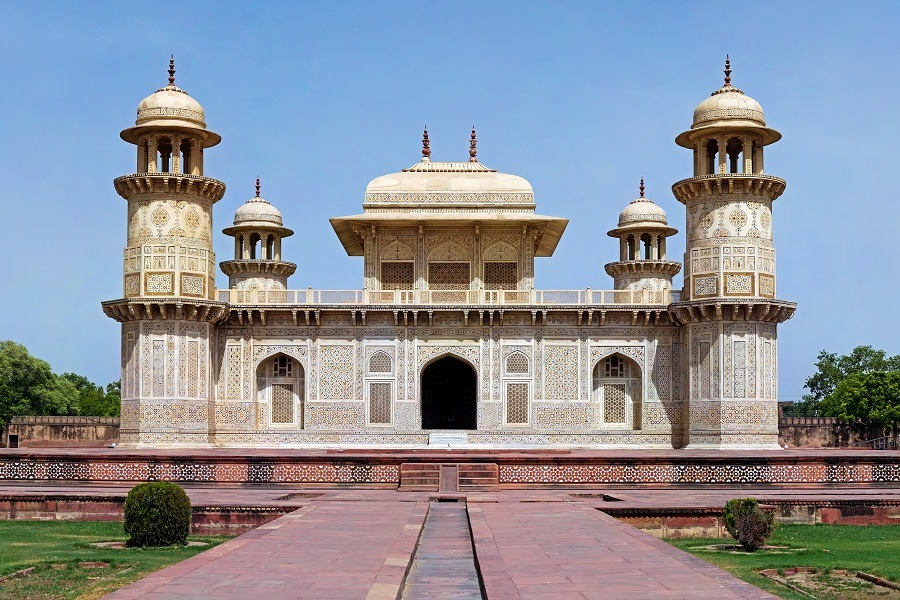 Located on the western bank of the Yamuna River, the Tomb of Itimad-ud-Daulah is a Mughal mausoleum built between 1622 and 1628 by the Queen of Jahangir, Nur Jahan as a memorial to her father, Mirza Ghiyas. It is also known as the Jewel Box or Baby Taj as it is believed that this tomb was the inspiration behind the construction of the Taj Mahal, among the most famous heritage sites near Delhi. The Tomb represents the perfect blend of Mughal and local architectural styles, and is the first monument in India built entirely with marble. The tomb stands 21 m high and features 12 m tall dome-roofed octagonal minarets at each corner along with a central hall, which houses the tomb of Mirza Ghiyas Beg and his wife Asmat Begum. 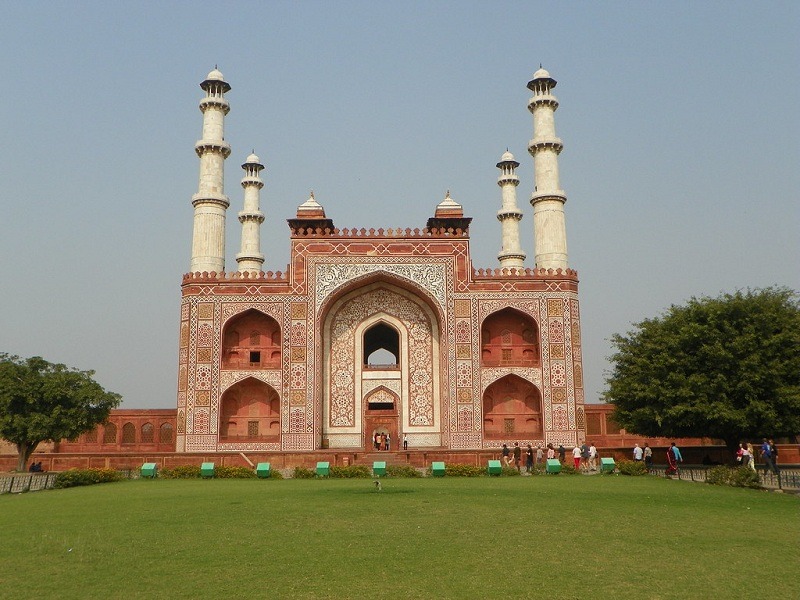 Besides the world-renowned Taj Mahal, Sikandra is one of the most prominent historic places to visit in Agra as it houses the mortal remains of the greatest Mughal Emperor Akbar. This deep red sandstone structure is an outstanding Mughal architectural masterpiece built-in 1605-1613. Located in a place called Sikandra, the construction of Akbar’s Tomb was started in 1600 by Emperor Akbar himself but was completed by his son Jahangir in 1613 after the death of Akbar in 1605. Entered through an elegant southern gateway similar to Buland Darwaza in Fatehpur Sikri, this five-storey tomb is pyramidal and stands beautifully in the center of a Charbagh style garden. 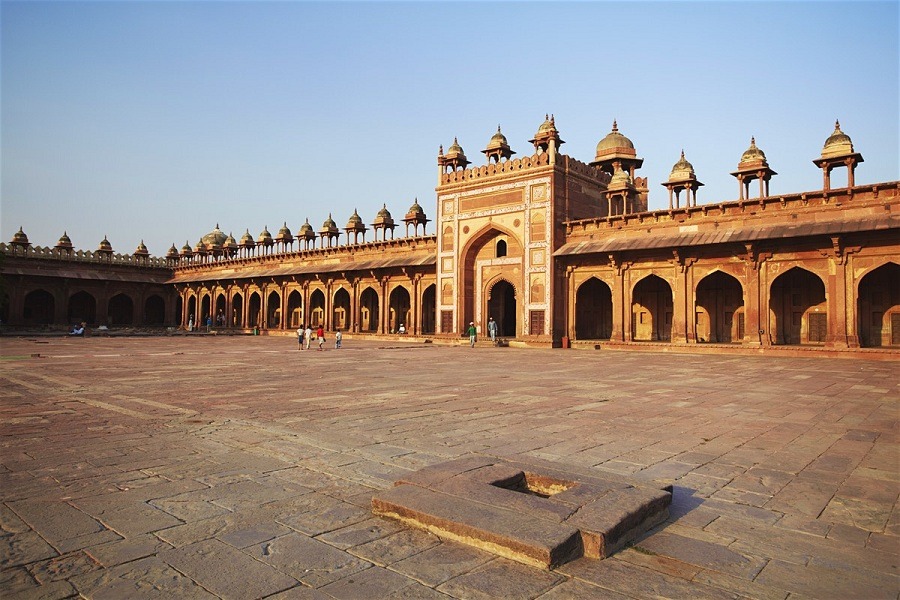 One of the top places to visit in Uttar Pradesh, Fatehpur Sikri is another UNESCO world heritage site that one must visit in Agra apart from the Taj Mahal. This abandoned fort city was commissioned by Emperor Akbar in 1569 AD and was served as the capital of the Mughal Empire from 1571 till 1585 AD. Bounded by a 6 km long wall, the fort complex of Fatehpur Sikri was built with an amalgamation of Indian, Persian, and Islamic architecture, and is considered one of the best-preserved collections of Indian Mughal architecture. Jama Masjid, Buland Darwaza, the tomb of Sheikh Salim Chisti, Khas Mahal, Panch Mahal, Khwabgah, Diwan-i-Khas, Anup Talao, and Diwan-i-Am are the prominent places to visit in Fatehpur Sikri. 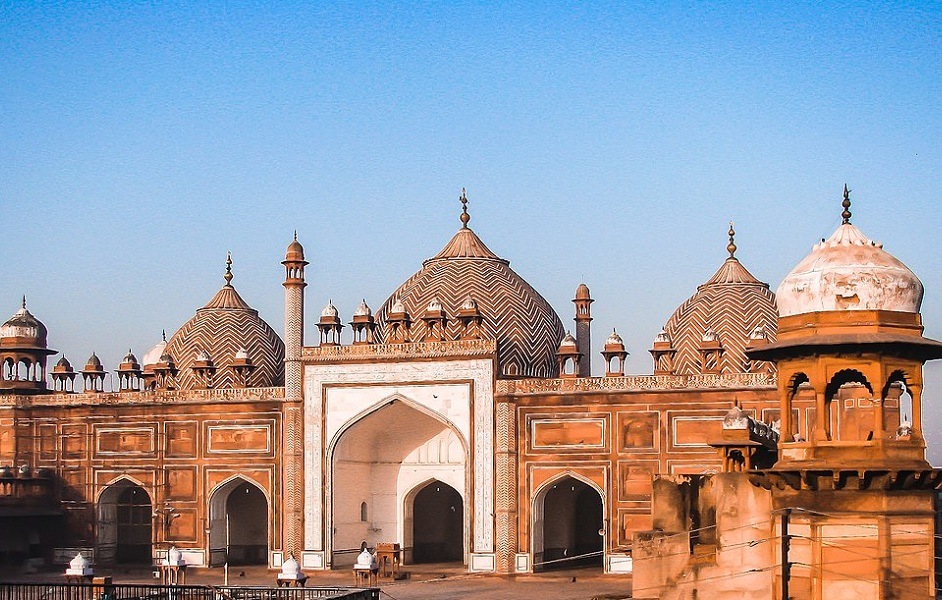 Jama Masjid, popularly known as the Jami Masjid or Friday Mosque, is situated just opposite the Red Fort, Agra, among the must-include places in Uttar Pradesh tour packages. Built by Emperor Shah Jahan for his daughter Jahanara Begum in 1649, it is one of the biggest mosques of India, and among the well-known Agra tourist places. This gigantic red sandstone mosque is known for its intrinsic designs and unique architecture. Built in the typical Mughal style, the mosque consists of a spacious elevated courtyard bordered by arched porticoes to the north and south, with a fountain at its center. The prayer hall of Jama Masjid occupies the western end of the courtyard which can easily accommodate up to 25,000 people to pray at a time. The lofty dome, imposing archways and stunning tapestry lends an aura to this place.