The dark-blue clouds, the lush greenery, the soft sound of the downpour, roaring rivers, and bursting waterfalls along with abundant freshness in the air make monsoon season one of the best times to get away from the chaotic cities. There are plenty of beautiful places to visit near Bangalore during the monsoon season that will take you in the lap of nature. From the mesmerizing Jog falls to the lush environs of Ooty, there is all the new dimension of attractions nearby and are just outside of Bangalore about 200-400 km in range, which makes them perfect weekend getaways. In fact, monsoon is also the time to undertake some of the best monsoon treks in the Western Ghats near Bangalore. Here is the list of some fantastic destinations near Bangalore where you should definitely be heading out this monsoon.

Also, browse the popular waterfalls near Bangalore for the complete list of waterfalls around Bangalore and Falls in Karnataka state.

Gaganachukki includes a huge horsetail shaped waterfall dropping from a height of 90 m and two large parallel streams that cascade down through a rocky bed from a height of over 320 feet. Bharachukki is situated at distance of approximately 1 km from the Gaganachukki (Dargah point). The cascading edge of Bharachukki is a little wider and is a cascading fall with a height of 70 m forming several streams through the wide rocky formations. Though geographically both the falls are adjacent, the viewpoints of these falls are about 15 km away. The Gaganachukki waterfalls are best viewed from the Shivanasamudra watch tower. Talakadu, Somnathpur and Mysore are the some tourist places to visit as part of Bangalore 2 day trip. July to January is the best time while August to October is the peak season. 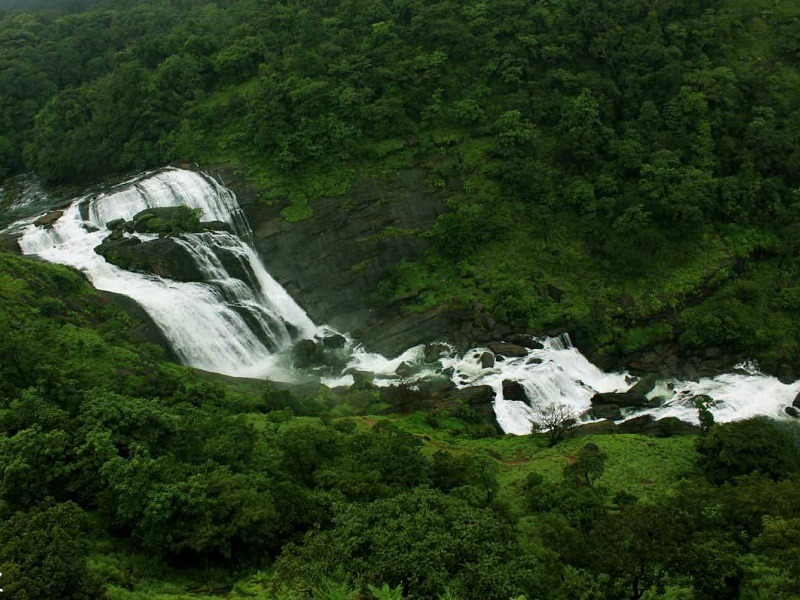 At an altitude of 1525 m in the Western Ghats, Coorg is one of the most famous hill stations near Bangalore. The beautiful nature and gorgeous waterfalls of Coorg come alive in rainy season, between June and September. Abbey Falls, Iruppu Falls & Mallali Falls are the must visit attractions in this season. The famous trekking trails of Coorg like Tadiyandamol, Brahmagiri and Pushpagiri are at their best in monsoons.

Coorg is one of the places with highest rainfall in India. Places like Raja’s seat, Golden Temple at Bylakuppe, Bagamandala, Nagarhole National Park, and Dubare are the major attractions you must include Coorg packages. The famous Cauvery River is originated in the hills of Coorg at Talacauvery. Elephant rides at Dubare Elephant camp and white water rafting in Upper Barapole River are other interesting things to do in Madikeri. While in Coorg, travelers must enhance their trip by choosing the best Coog Resorts to pamper themselves with opulence amidst picturesque vistas. 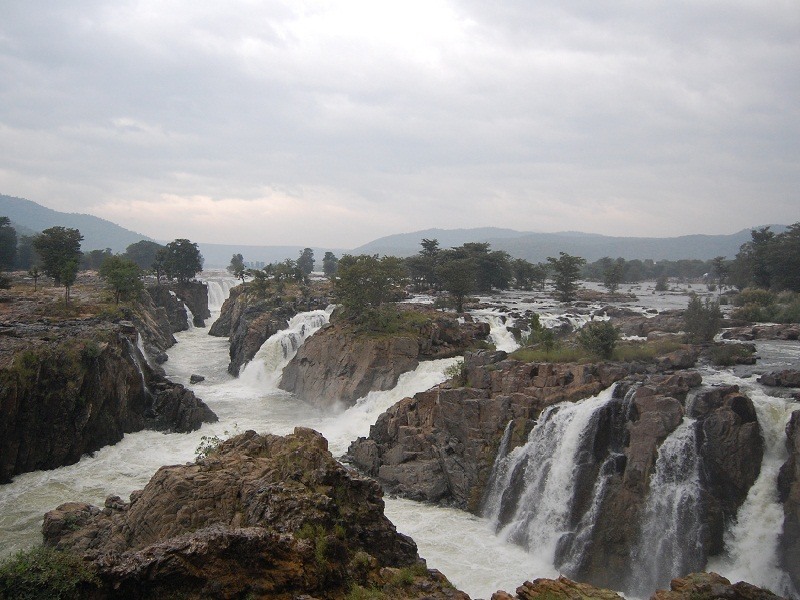 Formed over Kaveri River, Hogenakkal Falls is one of the best Bangalore monsoon getaways and one of the popular waterfalls in Tamilnadu, and also one of the top visited places as part of Bangalore tours. When the River Kaveri enters the Tamil Nadu border after winding its way through the state of Karnataka, it descends down the lofty landscape forming the Hogenakkal Waterfalls. The falls has about 14 channels with drops varying between 15 & 65 ft.

Often referred to as the ‘Niagara of India’, Hogenakkal Falls is one of the popular attraction not to miss in Tamilnadu Tourism Packages. Coracle riding is one of the main attractions here which is allowed during the monsoon and winter season. Boating is usually stopped in peak monsoons. Hogenakkal is also the good place to try out your swimming skills. The water is quite challenging. Tourists can also go for trekking on the nearby surrounding hills. The best time to visit Hogenakkal Falls is from July to October while the peak season is from August to October. 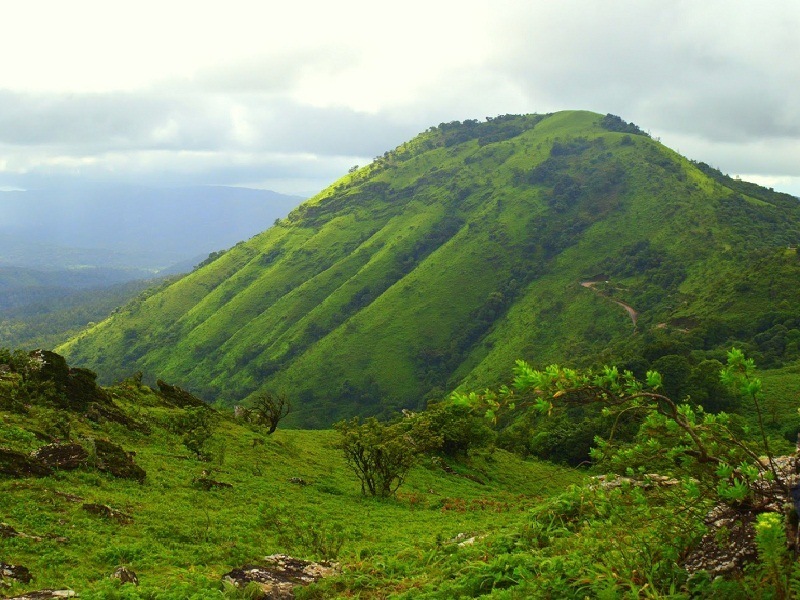 Situated at an altitude of 3,400 feet at the foothills of Mulliyangiri range, Chikmagalur is one of the cute hill stations in Karnataka, and among the least expensive hill stations in India. The Yagachi River originates from the surrounding hills.

It is also famous for coffee and is one of the top places to visit in Karnataka as part of Bangalore 2 day tour. It is the place where coffee was cultivated for the first time in India by Baba Budan in 1670. Hirekolale Lake, Baba Budangiri, Mulliyangiri, Ayyanakere Lake, Belavadi, Bhadra Wildlife Sanctuary, Manikyadhara Falls, Amruthapura and Kemmangundi are the important tourist places and among the must include places in your Chikmagalur tour packages. It is very less visited compared to Coorg and mostly attracts trekkers due to several beautiful peaks spread around the region. 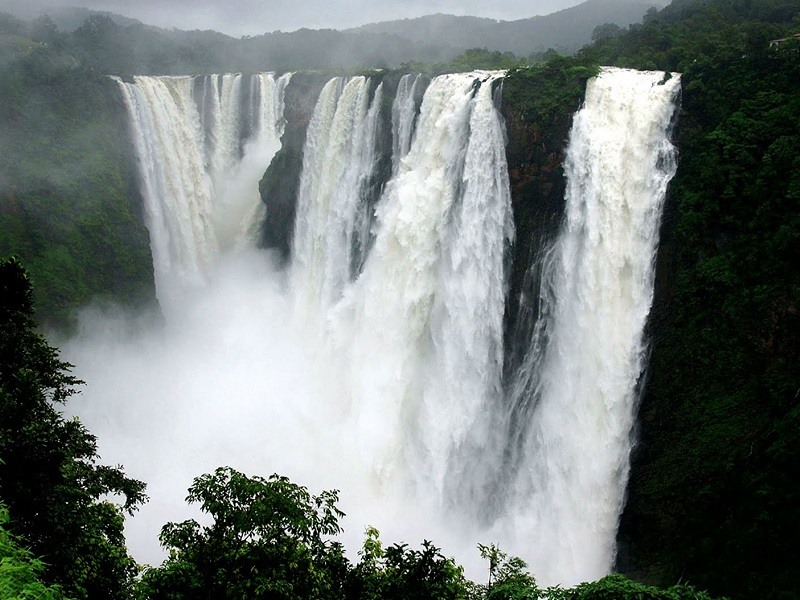 Locally known as Gerusoppe Falls, Gersoppa Falls and Jogada Gundi, Jog Falls is one of the best tourist places in India, and also among the best waterfalls in India. This is formed over the Sharavathi River falling from a height of 253 m (830 feet). The Sharavathi River flowing over a very rocky bed about 250 yards wide, 253 m deep and the water comes down in four distinct falls known as Raja, Rani, Rover and Rocket. The four cascades merge to form the huge waterfall. The Raja Fall pours in one unbroken column sheer to the depth of 830 ft. Jog Falls can be seen in gorgeous form in rainy season in July, August & September. It is one of the top monsoon getaways from Bangalore.

Jog falls is one of the most beautiful waterfalls in Karnataka and is one of the top places to experience the Karnataka Tourism in the peak monsoons. A narrow path from viewpoint leads to bottom of the falls. The walk is steep & little difficult and takes about 45 minutes one way. The view is amazing from the bottom and the showering sizzles of the falls at bottom are really worth the effort. However, the path is slippery and little dangerous during peak monsoons. Kudumari Waterfalls, Unchalli Falls, Koosalli Waterfalls, Bennehole Falls and Murudeshwar are some major attractions near Jog Falls. 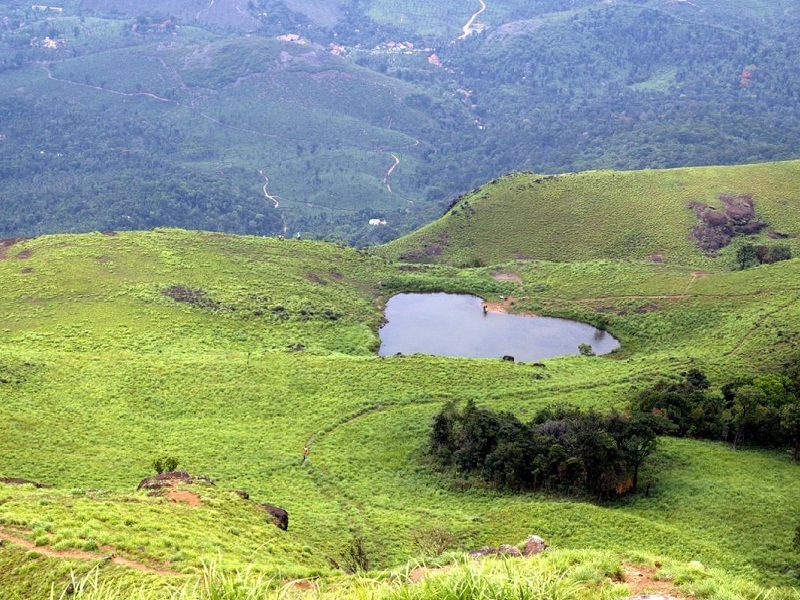 Wayanad is one of the fabulous hill stations in Kerala and also one of the top places to visit near Bangalore in July, August & September. At an altitude ranging between 700m to 2100m, Wayanad is the biggest foreign exchange earners of Kerala with its production of cash crops like pepper, cardamom, coffee, tea, spices and other condiments. Famous for Tea & Coffee plantations, it is also one of the top places to visit as part of Kerala tour packages. Kalpetta, Sulthan Bathery and Mananthavady are the largest towns in Wayanad and are the base stations to visit different tourist places in Wayanad district. Wayanad is one of the popular attraction you must visit along with your Ooty tour packages.

With several rain forests like Lakkidi, Wayanad is also one of the best places to visit in monsoon in India and among the popular hill stations in India. It has several Waterfalls (Meenmutty Falls, Soochipara Falls, Thusharagiri Falls), Dams / Lakes (Pookote Lake, Banasura Sagar Dam, Karappuzha Dam), Wildlife Sanctuaries (famous Wayanad WLS), and Peaks / Trekking Destinations (Brahmagiri Peak, Chembra Peak). Soochipara Falls, Pookote Lake and Chembra Peak are some of the best places to include in Wayanad packages. 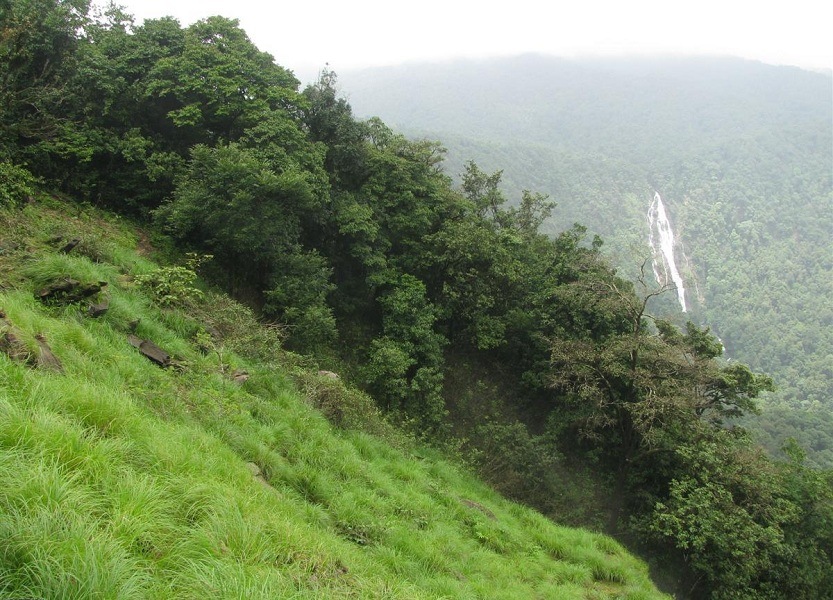 Agumbe is one of the most popular Bangalore places to visit in rainy season and is also one of the popular hill resorts in Karnataka. Situated at an altitude of over 2100 feet, Agumbe is also known as the Cherrapunji of South India as it receives the highest amount of rainfall in Southern India. It is also called Hasiru Honnu means green gold as it is home to several rare species of medicinal plants. Agumbe hill is one of the four peaks in the Western Ghats that borders the mainland and divides it from the coast of Arabian Sea.

Agumbe is surrounded by a rich biodiversity, and adjacent to one of the last surviving lowland rain forests. Many streams and waterfalls are hidden within the deep forests and slopes in and around Agumbe which come alive in the monsoon season. Sunset View Point, Udupi, Jomlu Theertha Falls, Barkana Falls, Onake Abbi Falls, Jogi Gundi Falls, Kudlu Theertha Falls, and Kunchikal Falls are some tourist places in Agumbe. It is the place where RK Narayan has filmed his novel Malgudi Days. Agumbe is also base station to several trekking trails including Narasimha Parvatha Trek. 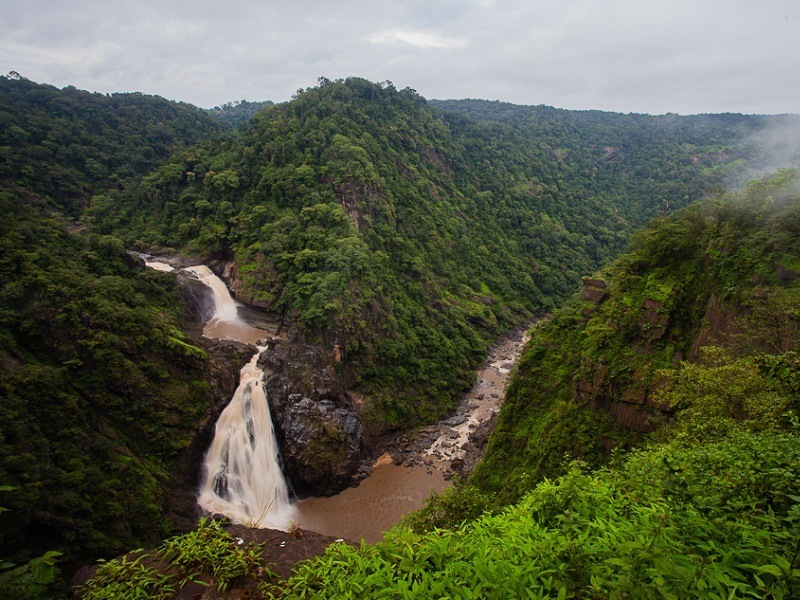 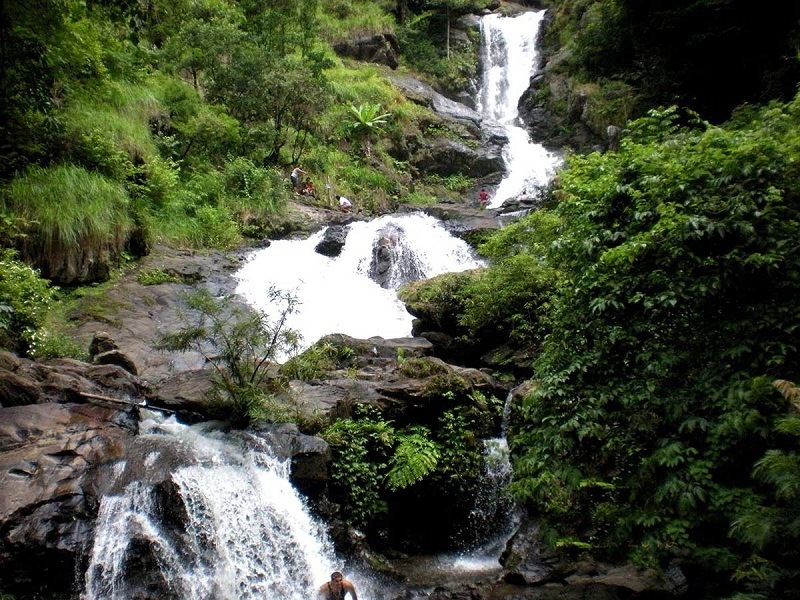 Situated in Brahmagiri Hills between Srimangala & Kutta, Irupu Falls is one of the famous waterfalls in Karnataka and one of the best Bangalore monsoon getaways. Locally known as Lakshmana Tirtha Falls, it is formed by Lakshmana Tirtha River, a stream originated in Brahmagiri Hills and joins Kaveri River. Dropping from a height of 170 feet through several stages, the falls are situated amidst thick forest of western Ghats and offers great views of the nature. Iruppu falls is one of the top Karnataka tourist places to visit in Monsoon season.

Iruppu falls is a part of the Brahmagiri forest range, there is a trek route that leads to the Narimale forest camp and then on to Brahmagiri peak. Permission from forest department is needed for doing this trek. There is a temple called Rameshwara Temple dedicated to Lord Shiva is located on the banks of the Lakshmana Tirtha River, enroute to the falls. Wayanad Wildlife Sanctuary -Tholpatty, Nagarhole National Park, Thirunelly Temple, Pakshipathalam and Kuruva Island are the some popular tourist places to be visited as part of Coorg 3 day tour. The best time to visit Iruppu falls is from August to January while the peak season is from September to December. 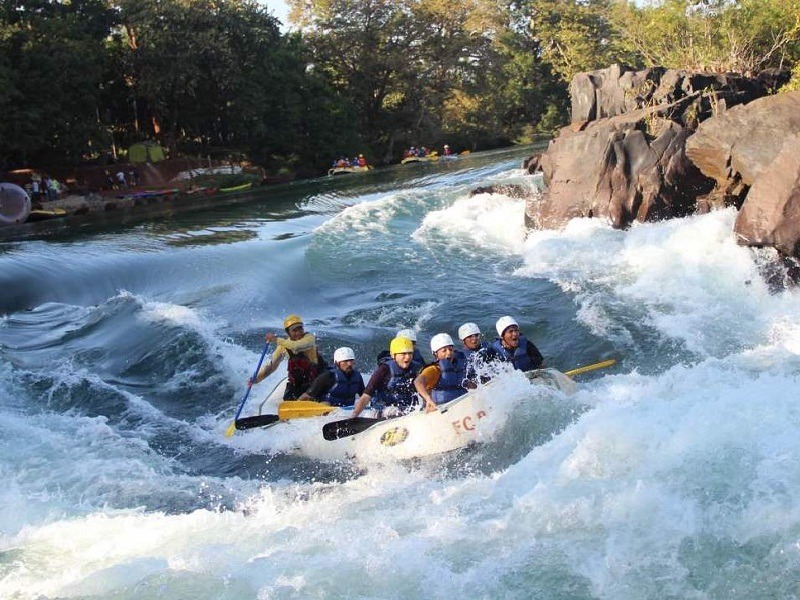 Dandeli is a picturesque town on the banks of the River Kali in Uttara Kannada district of Karnataka. It is among the top tourist places in Karnataka and also one of the best monsoon getaways from Bangalore. It is quite famous for its gorgeous natural backdrop, wildlife and adventure activities. Dandeli has a dense forest cover and is one of the best natural habitats in the state. Dandeli Wildlife Sanctuary is the second largest wildlife sanctuary in Karnataka. Dandeli is very close to Goa, you can visit Dandeli as part of Goa packages.

Dandeli is one of the top white-water rafting destinations in India. Kayaking, canoeing, water rafting, overnight rafting or canoeing trips on the Kali River, along with other adventure sports like cycling and mountain biking are some of the things one can indulge in here. Dandeli also offers crocodile spotting, nature walks, treks, boating, bird watching and angling trips. 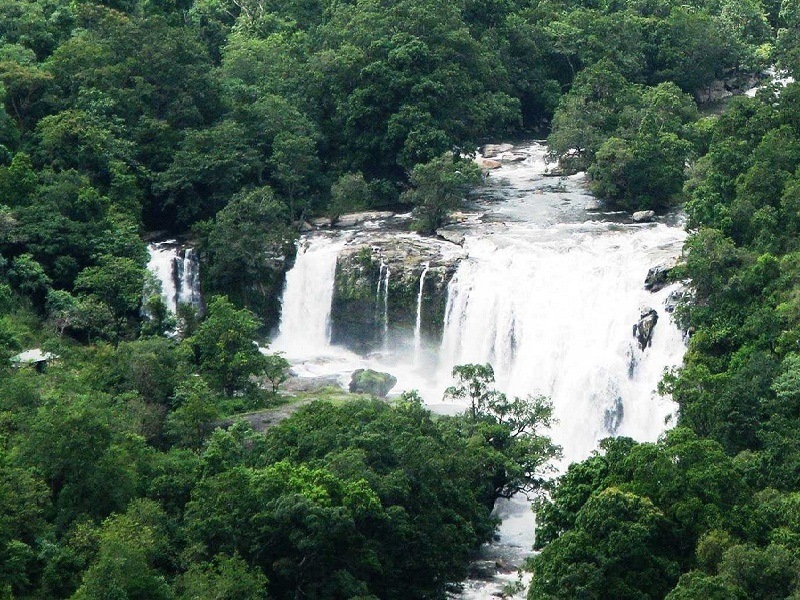 Idukki is a beautiful hill station and second largest district in Kerala state. It has a vast forest reserve area, more than a half of the district is covered by forests. Idukki is one of the popular hill stations in Kerala and also one of the best places to visit near Bangalore in monsoon. Also, Idukki is one the best places to visit in Kerala in monsoon and among the must include places in your Munnar tour packages. 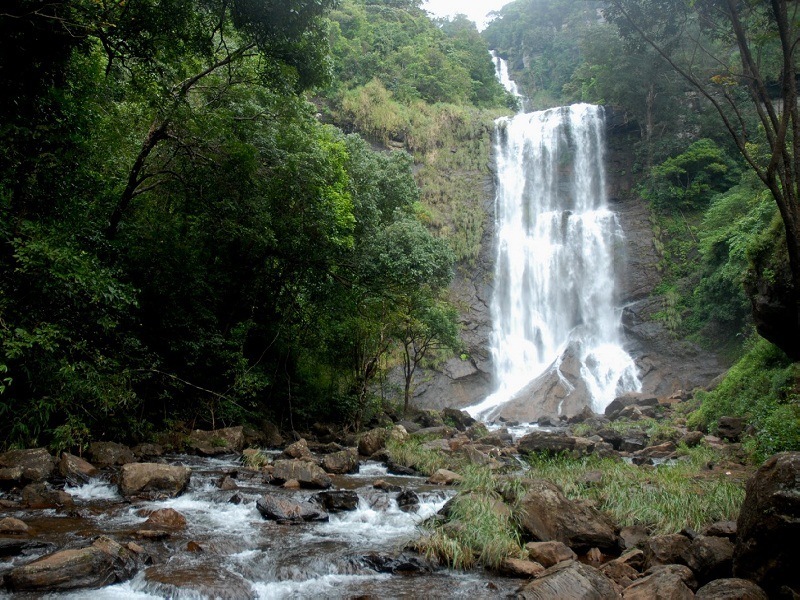 At an altitude of 1434 m in Baba Budan Range, Kemmangundi is one of the top monsoon getaways from Bangalore and also one of the popular places to visit in Karnataka . It is also popularly known by the name of KR Hills, named after the Mysore King Krishnaraja Wodeyar IV. The region is covered with plantations of coffee and tea along with thick bamboo groves forming a dense forest cover.

Kemmangundi is a beautiful hill station with breathtaking views of the valleys amidst mountain streams and lush vegetation. The main attractions of Kemmangundi are Z point, Hebbe Falls, Kalhattagiri Falls, Baba Budan Hill, Manikyadhara falls, Amruthapura, Bhadra Dam and Bhadra Tiger Reserve. The sunset view from the Raj Bhavan is a photographer’s delight. Kemmangundi is popular among tourists for trekking routes, mountain trails and other adventure activities. Shanti Falls and Hebbe Falls are the two famous waterfalls located here that offer trekking opportunities.