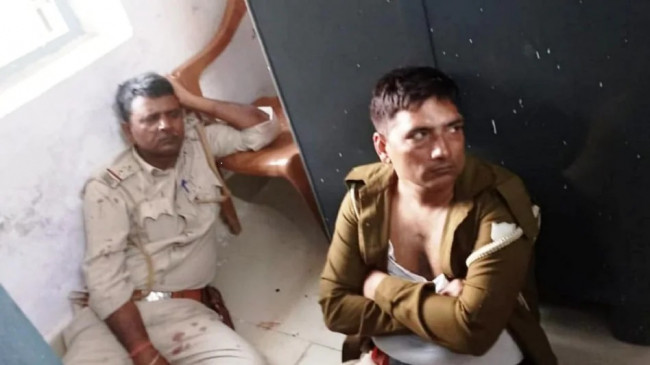 Digital Desk, Patna. Now when the judge is not safe in Bihar, then how can there be public? What can be a better example of Jungle Raj in Bihar? Yes, we are going to introduce you to similar news which will give you goosebumps after reading it. Let us tell you that there was a ruckus in the court of behavior in Madhubani district of Bihar when only two policemen beat up Judge Avinash Kumar badly and then pointed a pistol at him.

There was a stir due to the coercion of the policemen

Let us tell you that the case is of Jhanjharpur in Madhubani where two policemen have been accused of attacking Additional District and Sessions Judge Avinash Kumar and abusing him in filthy and lewd words. Let us inform that both the accused are working in Ghoghardiha police station, in which one Gopal Prasad is the station head of Ghoghardiha police station while the other accused is on the post of SI in the same police station. According to the information, this attack on ADJ Avinash Kumar was done during a debate between SHO Gopal Prasad and Sub-Inspector Abhimanyu. According to the report, Gopal Prasad and Abhimanyu Kumar suddenly attacked the judge and started beating him. Although ADJ Avinash Kumar is safe even after this attack. Both the accused have been sent to jail for attacking ADJ.

Let us inform that the Patna High Court has taken cognizance of the case of assault with the judge and the hearing of the whole matter will be held on November 29. Regarding this whole episode, the Principal Secretary to the Government of Bihar, Director General of Police Patna, Home Department and Superintendent of Police (SP) of Madhubani have sought answers. Let us inform that during the attack on the judge, many lawyers who came to the rescue were also injured. He has suffered minor injuries.

The judge was often in the headlines for his decision

Let us tell you that ADJ has often been in the headlines for his decision. He had also commented on the SP and DSP for not applying the sections properly to the accused in a case and said that he was not aware of the law. In fact, Judge Avinash has also commented on the SP of the district several times during his judgment. In which case both the accused policemen had to appear in the court. During the hearing of the same, both attacked.

It is worth mentioning that condemning the attack on the judge, the Vice President of the Bar Association Jhanjharpur said that the way the judge was attacked by two policemen during the middle debate in the court room, it is quite condemnable and an attempt to suppress the justice system. He has also raised a question mark on the police captain of the district in this whole matter. The Bar Association advocate has demanded prompt action after investigating the entire matter and has warned of a big agitation if it is not.

News
Farm Laws Have Been Withdrawn in the Interest of the Country: Yogi Adityanath