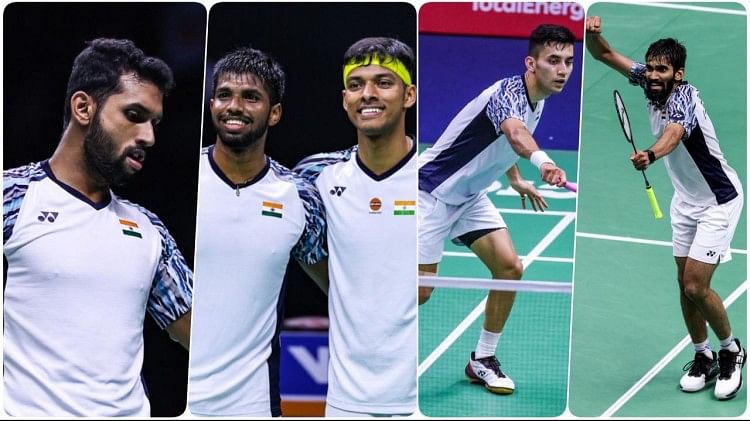 Kidambi Srikanth, HS Prannoy in singles and Satwiksairaj Rankireddy and Chirag Shetty played key roles in India’s victory. They won against their respective opponents. However, Lakshya Sen suffered a defeat at the hands of World Champion Viktor Axelsen. After registering victory, Satwik and Chirag

In the second game, Astrup and Christiansen bounced back and won 23-21. In the third and deciding game, Satwik and Chirag came back to take the game and the match 22-20. After this, the responsibility of giving India the lead was on the experienced Kidambi Srikanth. However, it was not easy for him, as former number one Anders Antonsen was in front. Srikkanth did not disappoint the Indian fans. He won the first game 21–18 against Anders Antonsen. In the second game, Antonsen made a comeback and won the second game 21–12. In the third game, Srikanth showed his mettle and beat Antonsen 21-16 to give India a 2-1 lead. However, after this a doubles match was to be played. India’s Vishnuvardhan Panjal and Krishna Garg were in front of Denmark’s Anders Skarup Rasmussen and Friedrich Sogard. Srikanth and Antonsen during the match

Both of them were easily defeated by the Danish pair 21-14, 21-13 in two consecutive sets. With this defeat, the score was leveled 2-2 and the whole burden came on HS Prannoy, who led Team India to victory in the quarterfinals. In front of Prannoy was world number-13 Rasmus Jemke. In the first game itself, India suffered a setback when Prannoy got injured while returning a shot. At that time, in the first game, Jemke took a 10-4 lead. After this Prannoy played the entire match with an injured ankle. However, despite an injured ankle, Prannoy’s spirits did not dampen. At one point in the first game the score was tied at 10-10. GEMK then took a 16-11 lead and then won the first game 21-13. Prannoy came back strongly in the second game. They first led 4-0 and then 11-1. The second game was easily won by Prannoy 21-9. HS Prannoy during the match Kidambi Srikanth, HS Prannoy in singles and Satwiksairaj Rankireddy and Chirag Shetty played key roles in India’s victory. They won against their respective opponents. However, Lakshya Sen suffered a defeat at the hands of World Champion Viktor Axelsen.

Dream of a billion plus just came true. Absolute champion stuff from our boys as they became the first ever team to advance into the S of #ThomasCup